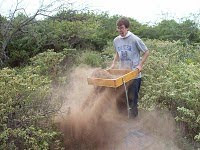 I find Rory’s ingenuity delightful. He has a great sense of play …

.. and he finds it difficult to argue with me, which I take as a compliment.

See here on the museum blog in which he names the archeology dig “Operation Queen Conch”. It seems like a small thing but you should be here when he’s throwing out grand literary flourishes:
“Rory, I don’t know how to make this interesting”
“Tell them it’s a once in a life time opportunity to meet the author of a distinguished literary publication and if they don’t come, Indiana Jones will show up on their door with his whip and …” etc. etc.
It can get a little far fetched, but the hyperbole is helpful if you hit a wall and we usually come up with something pretty great in the end.

The museum is supporting the survey of GT-4 which is cryptic and fun to say. It’s the site of the 4th Lucayan site (the people wiped out in 50 years) discovered on Grand Turk. I’m a little removed from this Operation since someone has to run the office and since I’m the coordinator for the after school program, I 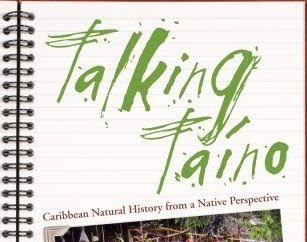 was nominates for office duty by default. I did get to go swimming yesterday though so I try not to be disappointed that I don’t get to go out and play in the dirt. The guys would say it’s not fun – lots of digging for hours and hours without rest. The leader of this expedition really cracks the whip! She’s the author of Talking Taino and one of the experts of the people that populated our islands. Another great academic encounter at the National Museum.

This entry was posted in Turks and Caicos National Museum. Bookmark the permalink.